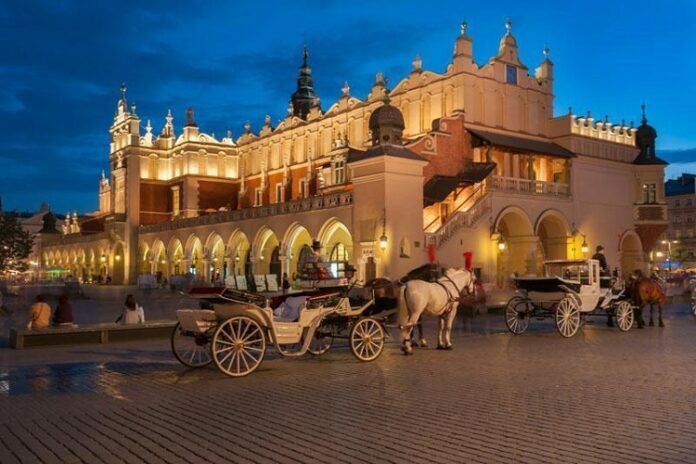 Poland is one of the last bastions of Catholicism in Europe. Therefore, pilgrimages arriving to Poland have really a lot of places to visit. Poland is also rich in contemporary saints and blessed figures such as eg. John Paull II, Maximilian Maria Kolbe or Faustyna Kowalska. Below you will find the list of the most important religious places in Poland that should be included in pilgrimage itineraries prepared for us by ITS DMC Poland that organises tourist trips and pilgrimages in all regions of the country.

Top 10 pilgrimage sites in Poland by ITS DMC Poland

Cracow is very rich in religious pilgrimage sights. First of all, there is Zebrzydowska Calvary which is even enlisted at UNESCO World Heritage List. Then, there are places connected to the Polish saint, pope John Paul II. Tourists can visit modern John Paul II Birth House Museum in Wadowice or find out John Paul II Centre in Cracow which is by the way just by Lagiewniki Divine Mercy Sanctuary connected to another 20th century saint Faustyna Kowalska and the centre of international pilgrimages. Close to Cracow there is also Jasna Gora Monastery in Czestochowa town which has been known for centuries as the most important walking pilgrimage destination in the country and the place of multitude of miracles and healings.

Pilgrimage sites of central and North of Poland

North and central Poland have two record pilgrimage destinations. First of all, there is the highest Christ Figure in the world in Swiebodzin. It is even higher that its famous Rio de Janeiro predecessor. Another one, is Lichen Basilica. It is the biggest church in Poland, the 7th one in Europe and the 11th one in the world. At the basilica’s bell tower there is also the biggest bell in Poland – Mary Mother of God (which weights almost 15 tones). The organs are also the biggest ones in the country. ITS DMC Poland also advices to climb Lichen Golgotha made of colourful glass stones which are particularly pretty. Other religious destinations worth mentioning are Niepokalanow, the centre of St. Maximilian Maria Kolbe cult and Swieta Lipka sanctuary located in Mazuria Lake District. The basilica of Our Lady with galleries and a monastery are the most important Baroque monuments in northern Poland. The sanctuary is one of the best well known Catholic places of cult in Poland and well known for its miracles and healings.

It is a well-known fact that people living in mountain regions of Poland has always tend to be more religious. This is why there are many shrines, sanctuaries and local places of cult in this region. This time ITS DMC Poland recommends to concentrate at two in their opinion most interesting examples. Kalatowki Sanctuary is an example of modern living devotion. National Shrine of Our Lady of Fatima in Zakopane was a vote of gratitude for saving the life of John Paul II on May 13, 1981 during the attempt of his assassination. The church itself is the main pilgrimage destination in Podhale region and the masterpiece of Zakopane architecture style. Another, interesting example can be found in the Sudetes and it is Wambierzyce Sanctuary with a calvary of 79 chapels. Wambierzyce Basilica with the calvary is often called “Silesian Jerusalem”.

Catholicism in Poland although, as in many European countries, is losing its believers is still strong in Poland. The phenomenon of religiousness is for many people a multidimensional area worth discovering and places of cult are visited by believing pilgrims and also by non-believers and just ordinary tourist. It is worth to include the above mentioned places not only In pilgrimage itineraries but also in ordinary sightseeing tours as they show the huge portion of the Polish soul and are definite artistic masterpieces. If any of the above mentioned pilgrimage sights caught your attention, feel free to contact ITS DMC Poland travel agent, whose professional group specialists will be happy to help you prepare your group stay in Poland.

The 7 Best Cities to Live in the Midwest

Tips for Decorating Your Space with Photographs

How to Find a Van for Hire

The 7 Best Cities to Live in the Midwest

Luxury Holidays on an Island

Tips To Buy The Best Travel Insurance Policy In India

How to pick the right airline carrier for your trip

S Visa Are Allowed for Those Working with Law Enforcement

8 reasons why Tasmania is rising on the top travel list

How Can an Immigration Lawyer Help You

What can you expect to see on New Orleans swamp tour?